September is Sepsis Awareness month; so, we thought we’d share some of the basics of Sepsis.  Sepsis is the body’s overwhelming and life-threatening response to infection that can lead to tissue damage, organ failure, and death. In other words, it’s your body’s overactive and toxic response to an infection.  At John Knox Village East & Meyer Care Center we have an infection disease control expert to reduce infection and its side effects. 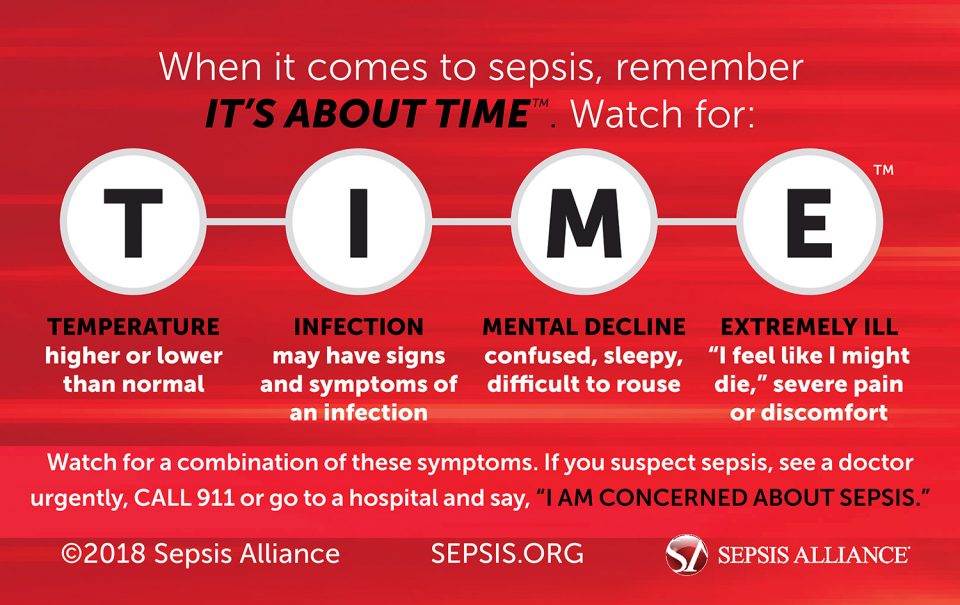 Your immune system usually works to fight any germs (bacteria, viruses, fungi, or parasites) to prevent infection. If an infection does occur, your immune system will try to fight it, although you may need help with medication such as antibiotics, antivirals, antifungals, and antiparasitics. However, for reasons researchers don’t understand, sometimes the immune system stops fighting the “invaders,” and begins to turn on itself. This is the start of sepsis.

Patients are diagnosed with sepsis when they develop a set of signs and symptoms related to sepsis. Sepsis is not diagnosed based on an infection itself. If you have more than one of the symptoms of sepsis, especially if there are signs of an infection or you fall into one of the higher risk groups, your doctor will likely suspect sepsis.  The warning signs of Sepsis can be remembered with the TIME acronym:

Temperature Higher or Lower Than Normal

Infection – you may have signs and symptoms of an infection

Sepsis progresses to severe sepsis when in addition to signs of sepsis, there are signs of organ dysfunction, such as difficulty breathing (problems with the lungs), low or no urine output (kidneys), abnormal liver tests (liver), and changes in mental status (brain). Nearly all patients with severe sepsis require treatment in an intensive care unit (ICU).

Septic shock is the most severe level and is diagnosed when your blood pressure drops to dangerous levels.

Sepsis has been named as the most expensive in-patient cost in American hospitals. One report stated the the costs were $24 billion in 2014. But at an average of over $18,000 per hospital stay and with over 1.5 million sepsis hospital stays per year, this actually works out to costs of $27 billion each year.

Studies investigating survival have reported slightly different numbers, but it appears that on average, approximately 30% of patients diagnosed with severe sepsis do not survive. Up to 50% of survivors suffer from post-sepsis syndrome. Until a cure for sepsis is found, early detection and treatment is essential for survival and limiting disability for survivors.

At our health center, we help people bounce back from many medical maladies and regain their strength and function.  We offer physical therapy, occupational therapy and speech therapy both on an in-patient and out-patient basis.

Call us at 660-584-4416 or email us at info@johnknoxvillageeast.com if you’d like to find out how we facilitate early detection and treatment of sepsis.

COVID-19 Update: Current information regarding the response and preparedness measures for communities managed by LCS can be found here. Call our national hotline for information 855-998-4934. Or call 660-584-4224 for local information about our community.